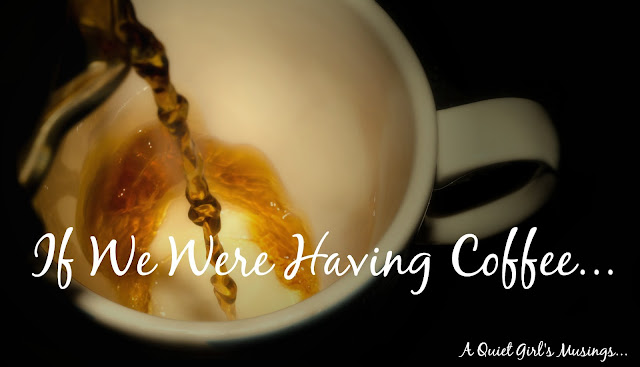 If we were having coffee this morning, we'd be in my living room.  It's Martin Luther King Day and I have the day off from work.

It's another gray, winter day here in the Bluegrass.  Even though it's not raining at the moment, it's still bleak and dreary.  I'll be venturing out around noon in hopes of getting in a walk before the rain starts again later this afternoon. Yesterday, I barely squeezed in my walk between the breaks in the rain; even then, the last mile or so I walked in a cold drizzle.  "It's been raining here on and off since Tuesday," I'd say.  "I feel like we've entered monsoon season."

As we settled in, you on the sofa and me in my recliner, I'd ask you if your new year has been off to a good start.  You'd fill me in on what's gone on in your life since we last chatted.  After some time, you'd take a sip of your beverage and comment on how I seem to be in much better spirits than I was two weeks ago.

I'd smile, chuckle softly, and then take a drink of my soda.  I'd turn to you and say, "I am."  Once I said sayonara to 2016, things have been looking a lot better. "I don't necessarily believe in that whole 'New Year, clean slate' adage," I'd begin, 'but I made an conscious effort to leave a lot of crap and baggage behind in 2016.  I simply refused to carry it around any longer.  Maybe that's as close to a clean slate as I can get."

You'd smile and then ask what I've been up to lately. "The same ol' same ol'..." I'd reply.  I'm still losing weight, walking as much as I can, and I've finally gotten used to getting up before dawn again after having two weeks off at Christmas. This time of year, once all the merriment and holidays are over, there's really not much going on other than the routine stuff of life.  "Work, commute, eat, sleep, repeat." I'd say with a laugh.  You'd nod and smile in agreement.

I'd take another drink of my soda and as I shifted in my recliner, I'd wince at the soreness in my backside.  Remembering what I did Saturday, I'd turn to face you again.

"Well," I'd say, "I did do something Saturday that could be considered out of the ordinary, for it's something I've never done before."  You'd look at me with curiosity and ask what.  "I took a women's self-defense class."

One of my speech path buddies started taking jiu jitsu a little while back and her instructors offered a free class for women on Saturday afternoon.  She invited me to go earlier in the the week and I thought, "Why not?"

You'd ask how it went and I'd tell you it went well, despite my still being a teensy bit sore.  Before, when I thought about self-defense, I always thought about the run of the mill maneuvers - jabbing with keys, using  elbows to land blows to the abdomen, using fingers to poke eyes, and the obligatory, kick to the balls.  As I said before, I've never taken a class before, but these are just things that I've picked up over the years.  "Oh, and to fight like hell," I would add.

"This class, however, was different," I'd continue.  They didn't touch upon any of those standards maneuvers.  Instead, they taught us some fundamental jiu jitsu techniques that appear to be very effective and were surprisingly common sense once you thought about it.

You'd ask if it was hard and I'd reply, "Not really."  If anything, it was more awkward than anything.  "Awkward?" you'd ask.  Yes, you see, my friend and I had pretend to attack each other.  At one point, we had to take turns straddling each other and pinning the other to the ground in order to practice getting away. "I'm just glad that I knew her, for doing something like that with a complete stranger would've been terribly awkward."

The highlight of the day, in my opinion, was when my friend, whom I easily outweigh by fifty pounds, sent me flying over her shoulder after I had her in a choke hold from behind.  Before I knew it, I was flying through the air and then landed on the mat with a loud thud. My friend was standing over me with the most astonished look on her face.  She didn't think she'd be able to throw me.  That look, full of surprise and pride, was priceless.

"Yeah," I'd say as I slowly leaned forward and arched my back in an attempt to stretch, "I'm still feeling that landing today, but it was so totally worth it."

After gently leaning back into my recliner, I'd say, "Although it was very educational and I got a bit of a weird workout, it's still a shame that classes like that have to be offered in the first place.  Wouldn't it be great if we lived in a world where women's self-defense classes weren't necessary at all?"

Thank you for stopping by and reading my latest installment of IWWHC.

Have a wonderful Monday!

Email ThisBlogThis!Share to TwitterShare to FacebookShare to Pinterest
Labels: If We Were Having Coffee...