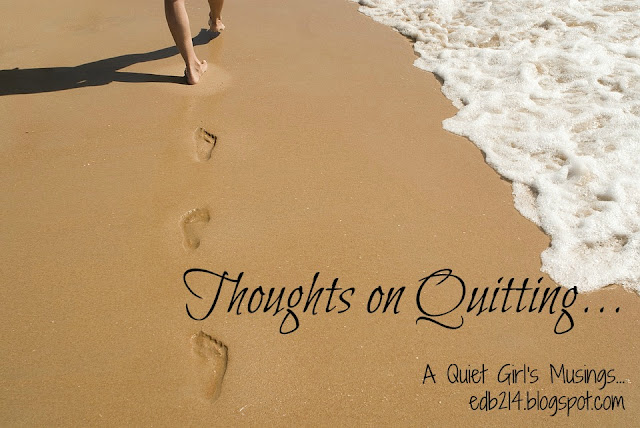 With all this talk of quitting in the air, I've spent some time recently pondering the question - When is it okay to quit?

Before I continue, I think it's fair to mention that I was raised in a family where quitting was, 99% of the time, viewed as unacceptable. My by-the-book, high school teacher mother and football coach stepdad had a strong, yet simple belief - if you start something, you finish it. End of discussion. That was the expectation and I was expected to follow it. And I did. As a result, I suffered through several books that were miserable (because they were assigned), a year long dance class that I absolutely despised, and an uber stressful softball season that, honestly, wasn't any fun. Through those experiences and many others in which I "stuck it out," I learned commitment, endurance, and loyalty, all skills and traits that I feel have been very instrumental in my adult life.

It's probably a good time to say this - Thanks, Mom and Si...

However, despite how much I've benefitted from those lessons and despite how firmly I believe in seeing things through, I know that quitting something, be it a marriage, a friendship, a bad habit, or something as trivial as a book, is often not only necessary, but often a good thing.

Case in point - Last year, I severed ties with a childhood friend with whom I used to be very close. (I touched on this back in June.)  In the two decades leading up to my walking away, our relationship had morphed from a friendship into more of an acquaintanceship. We were living different lives in different states, had different friends, and the only thing we had in common was a shared history in our little hometown back in the coalfields of West Virginia.

What remained of our relationship was strained even further during the previous seven or eight years, brought on by a string of bizarre, perplexing events that reeked of head games and brought unwelcomed drama into my life.  After the final event last year, an event in which I felt as if I had been manipulated and deceived, I had finally had enough.  I walked away from the friendship because it was obvious that it had run its course and, most importantly, because continuing it seemed like an open invitation for further drama and aggravation.  It was obvious that the relationship was detrimental and no longer beneficial.

I will admit, however, that I still feel a teensy bit guilty about quitting the friendship, even though I don't regret my decision.  I did what was necessary for my well being.

In my forty-something years, I have come to this essential belief - I don't believe in quitting easily.  I believe in making the effort, giving something an honest to God shot, and finishing what you start.  But, if what you are involved in or doing is no longer beneficial, is making you miserable, is detrimental to your overall well being, then quitting may be in fact not only the best option, but the only option.

Quitting something is rarely a cut and dry issue and from my own personal experiences, I know it usually involves numerous variables.  But, sometimes, despite my adverse feelings against giving up, I've discovered that is simply what you have to do.

Quitting can be scary, but I firmly believe that  it can open up space in your life for something better. Do I sometimes miss the friend I used to know? Absolutely. But, I enjoy the peace of mind and tranquility that has come as a result of walking away more.

What are your thoughts on quitting?  Are some things okay to quit, but not others?  How do you know when it's time to cut your losses and walk?  Please feel free to share your thoughts.  Remember, there are no right or wrong answers.


As always, thanks for stopping by!  Have a great Thursday! 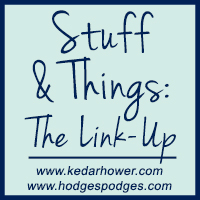 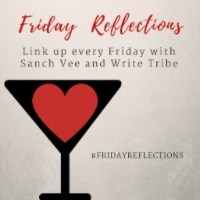 Friday Reflections prompts for this week:
1. Write a story or poem that begins with a character throwing a coin into a fountain
2. Write about something you’ve heard or read from an authority figure/organisation that you don’t agree with. Attempt a persuasive essay to convince us of another view.
3. Phobias: Have you got any? Share one of the quirkiest
4. “Life isn’t about finding yourself. Life is about creating yourself.” – George Bernard Shaw. Use this quote in your post or as an inspiration
5. Picture Prompt (via http://everydaygyaan.com) 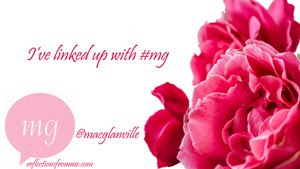