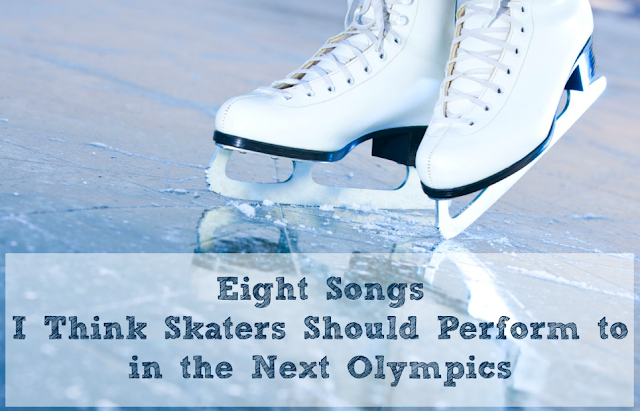 This year marks the first Olympics in which figure skaters have been allowed to use songs that contain lyrics in their programs.  Having only watched skaters perform to instrumentals previously, and being bored to death in the process, I think this popular decision by the International Skating Union is a good move. For me, it has at least made it more interesting.  I'm not sure I could've endured watching one more program skated to Tchaikovsky's "Swan Lake."

Quite possibly my favorite performance was that of the French pair, Vanessa James and Morgan Cipres, who skated to a remake of the Simon and Garfunkel classic, "Sounds of Silence."  But, the remake, as performed by the American rock band, Disturbed, was not the folksy version that many people are acquainted with.  Disturbed's version is raw, gritty, and...  haunting.  On the evening their performance was televised, I was only halfway watching when James and Cipres began their program, but within a few moments, that song had drawn me in and I watched the remainder of the program in its entirety.  At one point, the hairs on my arms stood up.  It is that kind of a song.

I also enjoyed hearing "Fix You" by Coldplay, a medley of songs from the motion picture Moulin Rouge, and Ed Sheeran's remake of Foy Vance's gritty, soulful "Make it Rain," a song that most of the general public is unfamiliar with, but fans/watchers of Sons of Anarchy will probably remember (as it was used in one of the last episodes of the series back in 2014).

Given the range of songs that were used in this year's Olympics, it really seems that the sky's the limit on song choices.  Here are eight songs that I personally would love to see ice skaters and/or ice dancers perform to in Beijing in 2022 (in no particular order):


Granted, this is not a song for the faint of heart.  Whoever would use this song would need to be a "balls to the wall" skater and be ready to hit it right from the start and not slow down until the end.

"Remember When It Rained" by Josh Groban


This song would be great for more traditional skaters who are embracing songs with lyrics, but who aren't ready to step very far out of their comfort zones yet.


This would be a great song for a pair who genuinely likes to skate with each other and doesn't take themselves too seriously.


"Come Over" by Kenny Chesney

This country song would be a great choice for a figure skating pair who prefer a slower tempo and who like to tell a story with their skating.

"Shut Up and Dance" by Walk the Moon


"Shut Up and Dance" would be a great song for an enthusiastic ice dance pair who like to be somewhat tongue-n-cheek and who have some awesome stamina.

"You Belong to Me" by Beth Hart


This relatively unknown song by blues songstress, Beth Hart, would be great for a pair who prefer a slower tempo and who like to tell a story with their program.


"Celebration" by Kool and the Gang


A perpetual, feel good classic and wedding reception staple, this song would no doubt pull in the crowd and get everyone excited.  Seriously, who doesn't love "Celebration"?


I have always considered this song to be one of the prettiest I've ever heard.  It might make for a very pretty skate program, too.


Looking at my choices, I feel sorry for any skater who would leave the song selection up to me!  LOL!  What do you think?  What is a song that you would like to see skaters perform to in Beijing?