Bridge Walk - Take A Walk on the Wild Side

In October 1977,  in the Appalachian Mountains of West Virginia, a marvel of modern engineering was completed.  The completion of the New River Gorge Bridge, the 3,030' four lane bridge that spans the New River Gorge, not only solved a decades-long transportation problem by reducing the time it took to cross the gorge from 45 minutes to 45 seconds, but it also opened up the southern part of the state to the outside world.

With an arch 1,700' long, the NRGB was for many years the longest single-span arch bridge in the world. This was, and still is, a huge source of pride for West Virginians, a people who, unfortunately, are used to the state ranking towards the bottom of many lists (education, unemployment, obesity, etc.). The NRGB held this title for 26 years until it was eventually dethroned in 2003 by the Lupu Bridge in Shanghai, China. Since 2003, two more bridges in China have surpassed the New River Gorge Bridge, making it the fourth longest single-span bridge in the world at the time of this writing.  This is still quite impressive if you ask me. The NRGB remains the longest single-span bridge in the western hemisphere and is the third highest bridge in the United States (876 feet).

Pedestrians are only allowed on the bridge one day out of the year.  On Bridge Day, the annual one-day festival held every third Saturday of October that celebrates the completion of this iconic landmark, the bridge is shut down to vehicular traffic and pedestrians can walk freely from one side of the gorge to the other.  Many spectators remain in the center of the bridge and watch BASE jumpers leap from the bridge, which is also only legal on Bridge Day.

Unbeknownst to many, people can walk on a 2-foot wide catwalk that is 25 feet underneath the surface of the bridge.  I know what you're thinking, "Whoa, whoa, whoa...  wait a minute.  How is that possible?" Well, not only is it possible but also it's also legal when you take a Bridge Walk Tour. 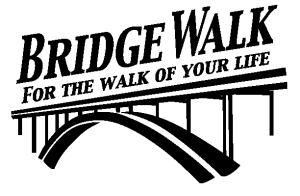 Bridge Walk beckons the curious and the adventurous to explore underneath the entire length of the New River Gorge Bridge from a maintenance  catwalk located under U.S. 19.  The leisurely 2-3 hour walking tour allows visitors to see both the beauty of the New River Gorge and the bridge itself from a unique vantage point that not many people ever see.

After years of talking about it, my mom and I decided to finally take a Bridge Walk tour in order to see the incredible views for ourselves.  Trust me when I say that we were not disappointed.

After arriving at the Bridge Walk office, checking in, signing liability release forms, and getting outfitted in some lovely harnesses, our tour guide lead our group outside to a waiting bus that took us to the Canyon Rim Visitor's Center.  From there, we walked along a short path to the entry point that took us underneath the bridge. 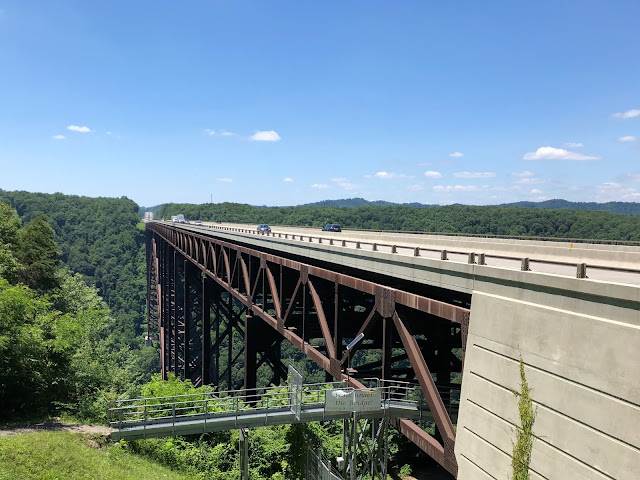 Once underneath the bridge and properly tethered, the expansive view of seemingly endless steel beams opened up before me. 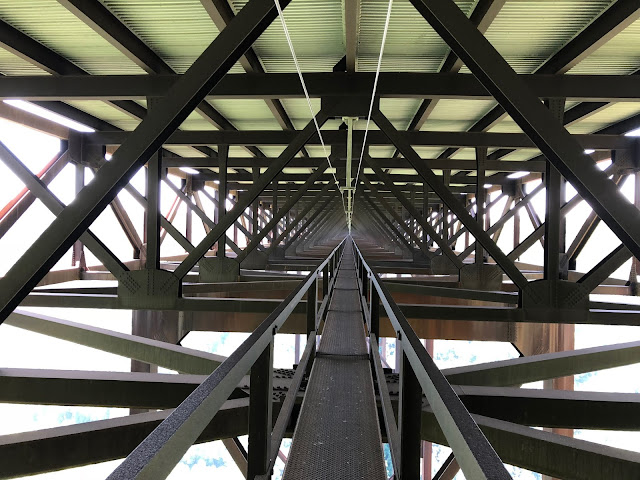 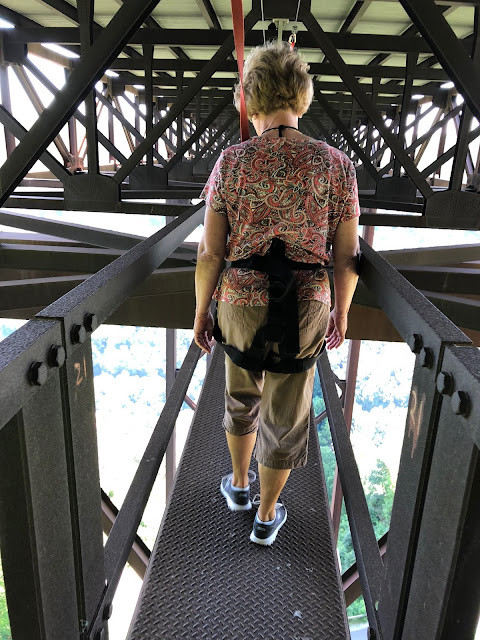 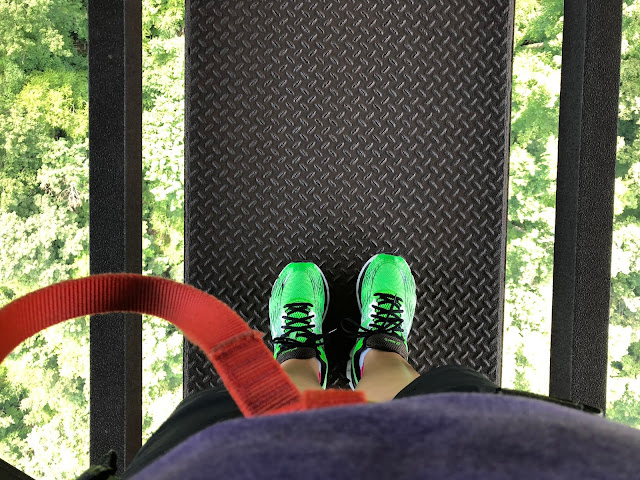 Of all the things I noticed, there were three things that stand out in my memory that had nothing to do with the view:

First, it was substantially cooler underneath the bridge as the updraft from the gorge below provided an continuous flow of air.  The region was experiencing somewhat of a heatwave on the day of our visit, so the "breeze" was well received.  Second, the bridge continuously vibrated and the vibrations varied from barely detectable to very noticeable.  At first, I will admit, this unnerved me a little bit.  After a while, however, I got used to it and only noticed it when semis passed overhead.  And third, when the traffic was light and no big trucks were on the bridge, the only things I heard were the wind and the rapids of the New River flowing below.  I was surprised by how tranquil it was. 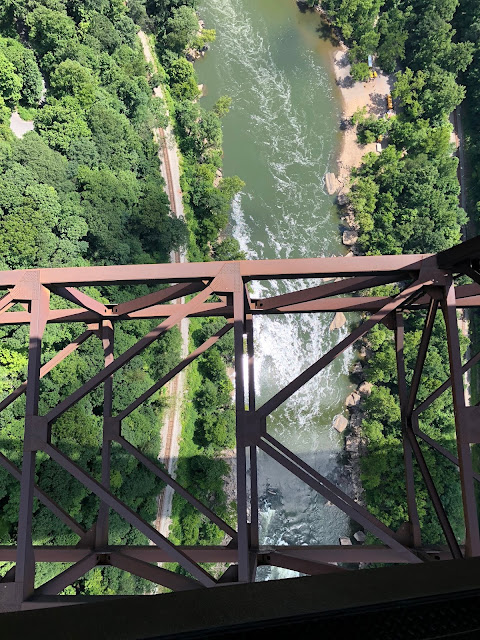 Looking down at the New River as it snaked its way between the steep, lush green banks of the gorge was quite a surreal experience.  As a white water rafter, I've had several up close and personal views of the New River; its rapids have smacked me across the face numerous times.  The ancient river looked so small that it resembled a painted river one might find on a topographical relief model or even that of a miniature railroad.  There were several rafting companies on the river that day.  However, if you weren't paying attention, you'd completely overlook the colorful rafts because they appeared so little. 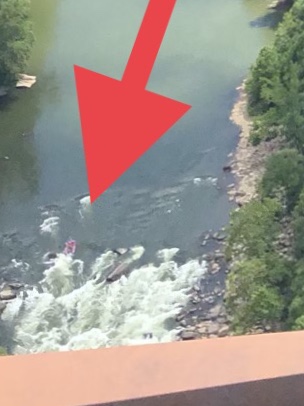 When we reached the other side of the bridge, our guide untethered us and we walked up a short incline to spot where a company bus picked us up and took us back across the bridge to the Bridge Walk office. The tour, from the time we departed the office to the time we returned, was approximately 3 hours.

The New River Gorge area has numerous outdoor activities, from white water rafting to hiking to ziplining, for visitors to choose from.  Bridge Walk is a great option to add to this list.  It's an activity that requires no skills what-so-ever and can be enjoyed by both old and young alike.  The only caveat is that it's a little bit pricey - $72.00 per person. 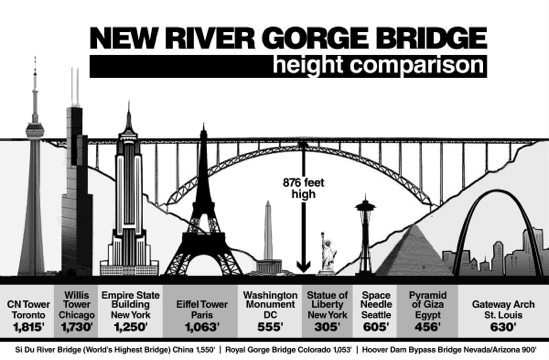 Have you ever completed a Bridge Walk (in WV or elsewhere)?  What did you think of it?

Shooting Stars Mag and Not In Jersey 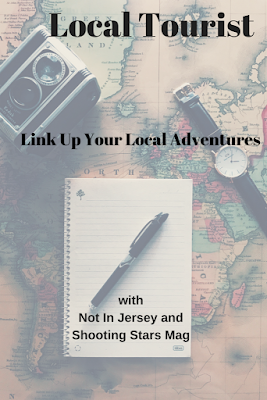 *Yes, I know that Bridge Walk is not located in the city where I currently reside, but it is located about an hour and fifteen minutes from my hometown in WV.  So, I took some liberty with this post. 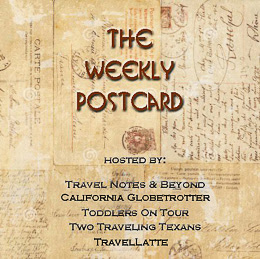 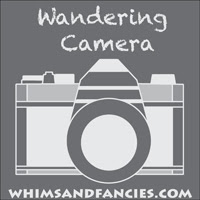